Shock & surprise met the Twitter community as the official Twitter account of the Associated Press was hacked.
The reason behind this being, the account posted “Breaking: Two Explosions in the White House and Barack Obama is injured” sending the social network into a frenzy before employees confirmed moments later that the account had been hacked. 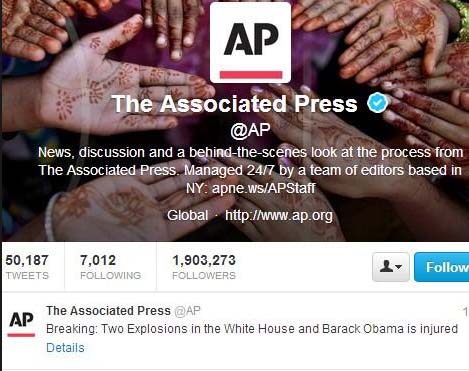 “The AP twitter account has been hacked,” the news cooperative said moments after the incident. “The tweet about an attack at the White House is false. We will advise more as soon as possible.”
The AP said that its Twitter account had been suspended following the hack and said it was working to correct the issue.
The cyber-attack is the latest in a string targeting international media organizations and US corporations.

Reports are also out that this hacking and tweet has led to the change of the Dow by 100 points.

Twitter Really Wants to Be Bought, Elon’s Deal Get Serious

Twitter Board Goes on the Defensive Over Elon’s Hostile Takeover

Elon Musk to Buy Twitter in a $43B Hostile Takeover

Kenya’s Progress On Digital Rights and Inclusion: How Badly Are We Doing?